“An Alabama company may have just set a new world record for raise bore drilling, an efficient method of mechanical shaft excavation that involves pulling a drill head to the surface from underground – essentially, drilling from the bottom up.

“‘This very well could be a world record,’ says John “J.J.” Cowin, Jr., President of Cowin & Company, Inc., which recently completed a 26-foot-diameter raise bore shaft. “We think it’s a world record. So does [equipment maker] Atlas Copco. But we do know it’s the biggest in North America.'” 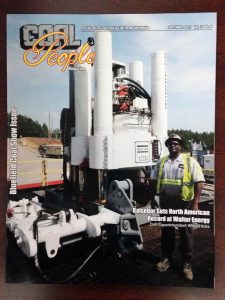